One fine Sunday in London, perhaps the last warm, sunny day of the year, we decided to escape the nice weather and, if for a little while, the Earth itself. 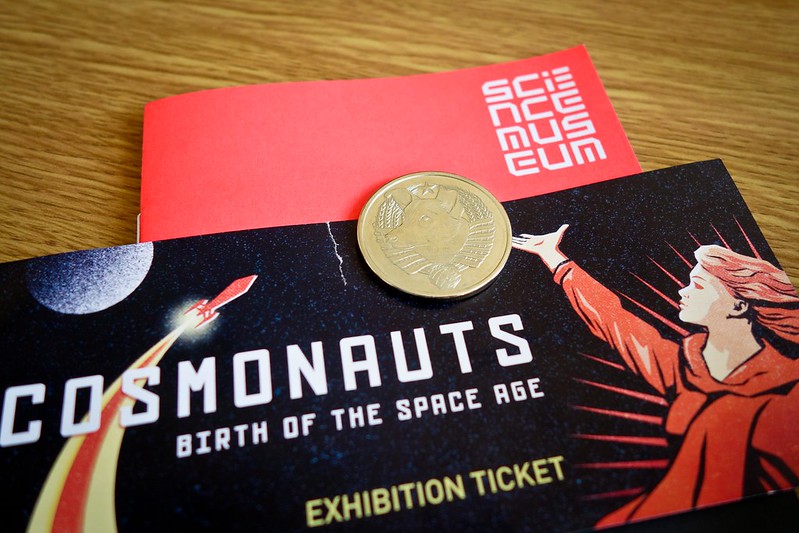 Cosmonauts: Birth of the Space Age tells the less well-known side of the space race from its early beginnings with revolutionary optimism, to the space dogs, Yuri Gargarin, Valentina Tereshkova and the pioneering International Space Station.

Unfortunately, photos weren’t allowed within the exhibition itself, not that it stopped many people, but I am a strict rule-follower if nothing else.

The exhibition begins with some amazing drawings and paintings illustrating the possibilities of space and an optimism for not just one new world on Terra Firma after the popular revolution in Russia, but in a new galaxy. There’s one particularly cool drawing of an imagined space city – I’d love to visit that!

Then, there are the space dogs. Laika was the first (and to me, the star of the whole exhibition), but multiple dogs were sent up. Laika didn’t return, but some did come home to a hero’s welcome (as they should!). Strelka went on to have puppies and one was presented to the Kennedy family whose descendants live on today.

The most spectacular displays were of the space capsules, tiny inside and horrifically scuffed on one side from their landing. There were also huge engineering models of moon landers, including one that was intended to take cosmonauts to the surface.

There was then a fascinating glimpse into life on the International Space Station. A lot of this isn’t very glamorous – the ISS isn’t exactly meant to be a spa! Astronauts now bathe with wet wipes after a failed attempt at installing a shower on board.

The exhibition ended with a simple quote painted on the wall to sum up not only the exhibition, space programme, but also why the endeavour continues in universities, space probes, the ISS and our collective imagination.

Earth is the cradle of humanity, but one cannot live in a cradle forever.

One thought on “Cosmonauts: The Best Blockbuster Exhibition in London?”